on April 26, 2020
Focus and peripheral vision are two things we touch on frequently in the context of self defense.
Being able to pay attention to the goal and the main obstacle, but at the same time to have an eye for everything else around you. Being aware.

Like tension and release these are two skills that go very well hand in hand. One works poorly without the other. 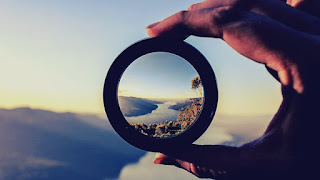 Focus naturally gets a lot of attention as a skill, but lots can be gained from paying attention to what's going on around you. And now I'm drifting a little...

It can be connected to the concept of active listening also. Many times we find ourselves talking to people, but not being in a true dialog but rather a dual monolog. You have an agenda and know where you're going with the conversation and what goal you want to reach. But in the process you might lose a lot of information as you're in your own mind waiting for the other person to finish his sentence so you can fire off ours. It's preplanned communication.

In my work I've been increasingly aware of the fact that when I engage with people, either as clients or as people I hire, there is the direct cause of the meeting and the other things.

One of my clients is doing music for kids, and she hires me and my recording studio to do new recordings. The thing is that she's also a social media expert. So, every time I'm working with her (and getting paid) my peripheral vision naturally is wide open. Tons of valuable hard earned knowledge is spilled - and I'm taking notes.

A guy that I hired to fix my mixing desk is an employe of the biggest pro audio vendor around. The day he came I asked him in a coffee break: "What task management software do you use". He said he had checked everything out on the market and system X came out on top. Think about that, Google on speed. Saved me tons of time. Asking the right questions to the right people.

So what was this post about? Maybe seeing the bigger picture. I got a little side tracked, but I guess that was the whole point... :-)
mindset